Over the past week the scorecards have been out, not just at the Olympics in Japan, but here at home – ranking the best, and worse, state economies in Australia.

Our friends from CommSec have been busy crunching the numbers, publishing the findings in their latest quarterly State of States report. But, can you guess who was crowned Australia’s best performing economy from the following?

If you guessed f. Tasmania, take a bow. You’re correct.

For the second year straight, Tasmania has retained the title, coming home first with its status as the best performing state economy in Australia, due to above-average population growth and a property market boom. The CommSec State of States report has Tasmania crossing the line first and taking the podium for the sixth quarter in a row. Well done Tasmania!

Now, this result aroused my curiosity and I wanted to find out more about how CommSec calculated these results and more importantly, why? so I dug a little deeper.

My first discovery was realising that the numbers crunched are relative. Meaning as a percentage of the population. That’s fair enough, if economic performance was based on dollar value Tasmania wouldn’t stand a chance. After all, Greater Sydney’s population alone is approximately 4.8 million and Tasmania has just over half a million people, and let’s not even get started on average house price.

Secondly, CommSec measures performance according to the previous decade’s average. What does this mean?

Well, the State of the States Report assesses economic performance by comparing the most recent result – such as retail trade or construction – with that of the ‘normal’ experience, where ‘normal experience’, is defined as the average over the previous decade. A resident of the state or territory can therefore assess whether they are experiencing relatively better economic times. Comparing states or territories on the same criteria determines which state or territory is performing the best on a certain indicator.

The State of the States report assesses 8 different indicators of economic performance for each State. Below, we have a quick look at each of them, and which States stood out.

WA’s economy is the winner here, with economic activity in WA increasing by 23.3% above ’normal’. Perhaps not unsurprising largely thanks to the momentum provided by the mining and construction industries. Tasmania placed second and Victoria third.

Inflation adjusted retail trade figures are used to measure this. Here we see the ACT taking this category out with a 17.6% increase, ahead of Tasmania and Queensland.

This indicator measures each State’s spending on new plant and equipment. Tasmania’s increased by a 52.3%, compared with ‘normal’ performance.

With the unemployment rate in Tasmania being at a 12-year low at 4.5%, 30.8% below the decade average, Tasmania has the strongest job market in the country.

Measuring the total value of residential, commercial and engineering work completed in the quarter. Victoria retained in the top spot here, at 12.8% above its decade average.

Population growth drives the broader economy, especially retail spending and housing demand. Average population growth was low across the country, with no economy above the long-term averages. However, Tasmania remains the strongest with its 0.6% annual population growth just 0.7% below the decade average. Perhaps unsurprisingly, thanks to prolonged lockdowns, Victoria ranked lowest.

Housing finance is measured by the value of owner-occupier housing finance commitments (home loans). Here we see Victoria rank first, with home loans up over 100% on the decade average.

As measured by the number of new properties being built, Tasmania’s dwelling starts are up 61.1% for the quarter, and are at 27-year highs.

A special mention goes to South Australia here, whose dwelling starts is at 36 year highs!

So, of the eight indicators of economic performance, Tasmania ranks first in four of them.

Tasmania then managed to rank second in two of the other indicators, construction work and retail spending.

CommSec Chief Economist, Craig James, said Tasmania was likely to continue performing as the nation’s best economy for at least the remainder of the year.

“As a result, it’s unlikely we’ll see any considerable change at the top of the rankings in the near future.” Mr James said.

However, I’m keeping my eye on WA, as Mr James believes that the biggest mover and shaker will soon be WA, which has jumped from sixth place to third place, its highest ranking in six years.

Curious to see the other results? and where your State placed?

Below is the ranking all of the states and territories. I don’t know about you, but there’s definitely a couple of surprises in it for me!

Tasmania also ranked first in increase in house prices over the last quarter, whilst the national average was 13.5%. 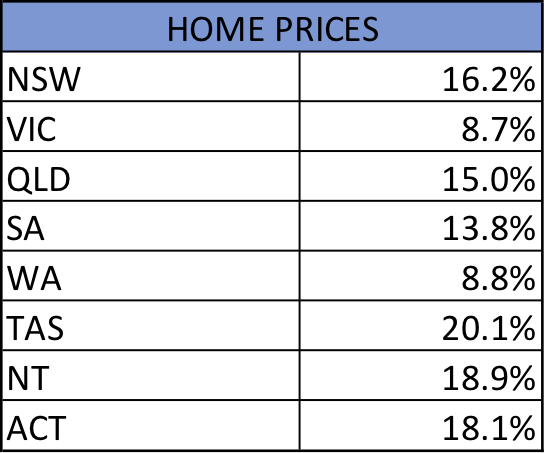 Find below a link to the latest CommSec State of States report.